The word inertia is frequently used in the context of an individual or business or government’s inability to make a relatively quick change due to factors that provide a large resistance to making such change. Thereby requiring external “forces” to overcome the inertia to facilitate change.

So we generally speak in terms of the “moment of inertia”.

A measure of the resistance of a body to angular acceleration about a given axis. 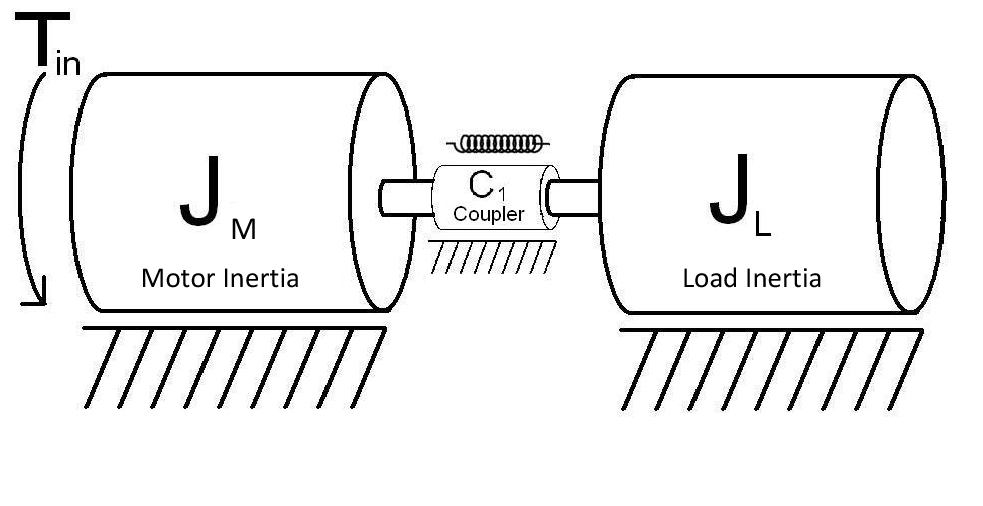 The drawing above depicts a motor, a coupling (shown as a torsional spring) and a load which in this case is a cylinder/disc with a given diameter and mass. The torsional spring is not a real world example of a coupling but will be used to help explain how excessive compliance in a coupling can impact performance of a system.

The Inertia of the cylinder/disc can be calculated by knowing its Mass (M) and radius (R).

[Author’s Note: The purpose of this article is not to go into details as to how the moment of inertia is calculated. That will be covered in a future article. You can also Google “moment of inertia calculation” and there will be a lot of information on the subject]

Some observations regarding the inertia formula:

This brings us to torque.

Torque is a measure of a rotating force through a radius. For example if you were to apply a 1 pound force to a lever that is 12” long at the end of the lever the applied torque would be 12 inch-pounds.

The rotational output force of a motor is measured in terms of torque. When looking at motor spec sheets you will see various units of measure for motor torque such as foot-pounds; ounce-inches; newton-meters; etc. It is always a combination of a force and a length term, the order of the terms doesn’t matter (10 ounce-inches = 10 inch-ounces).

In order to change the rotational velocity of a load (acceleration), motor torque is required to overcome the inertia of the load:

The larger the inertia (motor + load) and/or the amount of acceleration needed the more motor torque is required. This can have a significant impact on the motor size.

Inertia ratio is defined as the ratio of the load inertia IL to the motor inertia IM:

Generally speaking the higher the inertia ratio the greater the potential for poor system performance. A high inertia ratio combined with a coupling method between the motor and the load that is very compliant (springy) can produce very poor performance in terms of settling time and resonance.

A torsional spring was shown in the first diagram as a much exaggerated non-real world example of compliance. I represented the coupling this way so that you can get a better sense as to what can happen with a real coupling that has a certain compliance and is subjected to high accelerations with a large inertia mismatch.

The two most potentially damaging results due to this combination is excessively long settling times and uncontrolled system oscillation!

As you can imagine, if you had a very compliant (springy) coupling combined with a relatively large inertia mismatch (3:1 and higher as an example) you can see how a lagging – leading scenario can be set up between the motor and the load.

In some cases a resonance can be set up that causes the load to continually oscillate even to the extent that it increases to a point where it can cause mechanical damage to components in the system. This could happen at any time in the rotation of the motor if it goes through a resonant frequency of the system.

This can be described mathematically by modeling the components of the system, creating a Laplace transform and analyzing the resulting bode plot for regions of instability. There are published articles on line that provide this analysis in detail. However, if you are not comfortable with high level mathematics as it applies to Laplace transforms and control theory you will have difficulty grasping a lot of it.

So what can be done to minimize the potential of these unacceptable performance issues?